WOMEN WHO CHANGED THE WORLD: Emmanuelle Charpentier and Jennifer A. Doudna, Nobel prize in Chemistry 2020

Posted by Ines Violeta Ortega Garcia at 10:23 AM No comments:

women who have changed the art world

Here are 20 female artists that you need to know, because their work changed the art world:

Posted by Ines Violeta Ortega Garcia at 3:10 PM No comments:

"Octavia Estelle Butler was inspired to write science fiction after watching a schlocky B-movie, Devil Girl from Mars. She was twelve years old and thought: “Geez, I can write a better story than that.”

Her mother did domestic work, an experience that would shape Butler’s writing. “I was around sometimes when people talked about [my mother] as if she were not there, and I got to watch her going in back doors and generally being treated in a way that made me… I spent a lot of my childhood being ashamed of what she did,” Butler remembered in a 1991 interview with the journal Callaloo. She would later attempt to resolve these feelings in her most popular novel, Kindred.

Despite her dyslexia, the young Butler read voraciously. “I read a lot of science fiction with absolutely no discrimination when I was growing up—I mean, good, bad, or awful [laughs]. It didn’t matter,” she said in a 1996 interview published in Science Fiction Studies. She devoured everything from Theodore Sturgeon to Robert A. Heinlein to Ray Bradbury.

She began trying to sell her science fiction writing when she was thirteen. “I didn’t know what good writing was frankly, and I didn’t have any particular talent for writing so I copied a lot of the old pulp writers in the way I told a story,” Butler told Callaloo. “Gradually I learned that that wasn’t the way I wanted to write.”

Of course, the world of science fiction was (and still is) dominated by white, male authors. Instead, “Butler approached [science fiction] askance, choosing to write self-consciously as an African American woman marked by a particular history,” write literary scholars De Witt Douglas Kilgore and Ranu Samantrai.

In 1969, she was discovered by well-known science fiction writer Harlan Ellison at a screenwriting workshop in Los Angeles. “Harlan [wrote] that she wasn’t a very good screenwriter, which doesn’t surprise me much,” recalled friend and fellow sci-fi writer Vonda McIntyre. “Her subjects and ideas and expressions were deep and complex. Screenplays have strengths, but ‘deep’ and ‘complex’ aren’t high on that list.” Nevertheless, Ellison recommended Butler for the Clarion Science Fiction Writers Workshop.

After leaving the workshop, Butler sold two short stories (one to Ellison). “I thought I was off, I thought I was a writer,” said Butler in a 2003 interview. “I didn’t sell another word for five years.”

She held menial day jobs “to keep her head above water,” writes McIntyre. “Then she would get up early in the morning—two or three o’clock—and write before going to work.”

Then, in 1976, Butler finally sold her first novel, Patternmaster. She spent the next few decades growing her audience, which was split between science fiction devotees, Black fans, and feminists. Her books grew more and more successful, especially after she became the first science fiction writer to receive the MacArthur “Genius Grant” in 1995.

Though she passed away in 2006, Butler continues to inspire writers and scientists today. NASA recently paid tribute to her influence by naming the Mars rover’s touchdown site Octavia E. Butler Landing. After decades of writing and teaching, Butler’s work has now become “an essential part of what we mean when we speak of science fiction,” write Kilgore and Samantrai. “That is a measure of immortality"."

Posted by Ines Violeta Ortega Garcia at 1:22 PM No comments:

"Sharon Peacock, one of the world’s top scientific warriors in the battle with the 0.0001-millimetre virus that causes COVID-19, had to fight a much more personal battle inside Britain’s education system to rise to the top.

Peacock, 61, is a globally recognised virus hunter: COVID-19 Genomics UK (COG-UK), which she set up a year ago as the pandemic swept towards Britain, has sequenced nearly half of all the novel coronavirus genomes so far mapped around the world.

Her life story is a song to meritocracy and an illustration of how the quiet kindness of strangers can change the fate of a young life.

But it is also a tale of how the British educational system almost overlooked the talents of a young woman who would become a distinguished Cambridge professor of microbiology and put her country at the leading edge of sequencing a virus that has sown personal and economic devastation across the planet."

Posted by Ines Violeta Ortega Garcia at 3:25 PM No comments:

"“Women have been a force in making all the history that has ever been made,” wrote Mary Ritter Beard in 1931, over half a century before the first presidential proclamation of Women’s History Week (as it was first called). Beard called not just for including women in history, but for expanding the very idea of history itself: “the narrative of history must be reopened, must be widened to take in the whole course of civilization.” As scholar Margaret Smith Crocco shows, Mary Beard fought hard for that expansion.

Mary Ritter, born in 1876, married Charles Austin Beard in 1900. They became a powerhouse Progressive Era couple. He was one of the most famous American historians of the first half of the century, revolutionizing the interpretation of the American Revolution. She was a suffragist, a historian in her own right, and a pioneering archivist instrumental in gathering the records of women’s history.

The Beards’ jointly authored books included textbooks and Book-of-the-Month Club selections, widely read beyond academic circles. They collaborated on “colossal” multivolume works, working together without a telephone in their home in Connecticut and then, in winter, out of hotels in Washington, D.C., so as to have access to the Library of Congress. Despite Charles Beard’s “emphatic insistence on the shared nature of their scholarship,” these books were often attributed solely to him. Crocco notes that Charles would also demand that the publisher not use blurbs from reviewers who refused to recognize the fact of dual authorship.

In addition to her collaborations with Charles, Mary Beard’s own major works—Women’s Work in Municipalities (1915), America through Women’s Eyes (1933), and Women as Force in History: A Study of Traditions and Realities (1946)—were foundational for the next generation of women historians. Gerda Lerner, “viewed by many as matriarch to the women’s historians emerging in the seventies,” said of Women as Force, “I was struck, as by a sudden illumination, by the simplicity and truth of her insight.”

Mary Beard was “marginalized both figuratively and literally as a woman who chose to work outside the institutions that would have given her efforts authority and legitimacy,” Crocco writes, adding in conclusion that Beard’s “call for a truly liberatory feminism and emancipatory forms of education for both men and women continues to define the boundaries of the culture’s imagination.”

Posted by Ines Violeta Ortega Garcia at 3:29 PM No comments:

"Even for an artist like Berthe Morisot, who had family support and would achieve great success with her work, dedicating her life to painting was a huge sacrifice: deviating from the prescribed role as wife and mother would cost her dearly in her personal life .

Even her fellow painters looked at her with disdain: Morisot was banned from the impressionist gatherings at the Café Guerbois and the Café de Batignolles.

There were two exceptions who did appreciate her effort to express the feminine vision through Art and her talent in capturing an atmosphere of light and delicacy, and transferring it to canvas:

The first was Edgar Degas, who as co-founder of the Impressionist Exhibitions invited her to exhibit from the first edition, in 1874!, And was key in the dissemination and success of her work.

The second was Claude Monet, who corresponded with her and treated her as equals, colleague to colleague."    (Free translation)

Posted by Ines Violeta Ortega Garcia at 12:43 PM No comments:

WOMEN WHO CHANGED THE WORLD: MEDICINE STUDENTS ON XIXth CENTURY

An Indian woman, a Japanese woman and a Syrian woman. All training to be doctors at Women’s Medical College of Philadelphia. 1885. 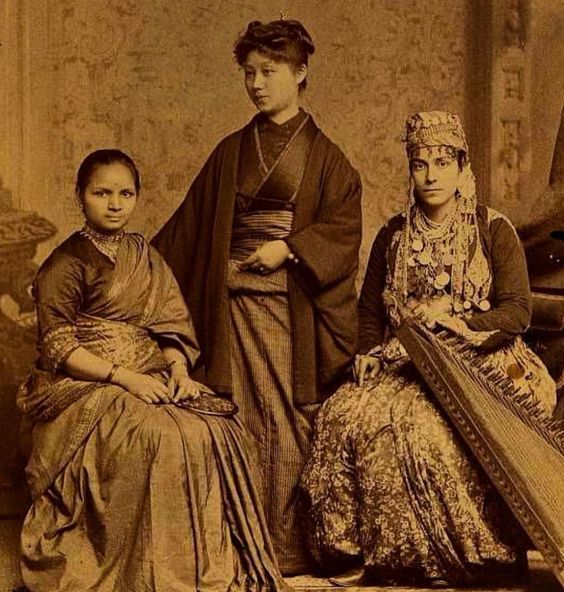 Posted by Ines Violeta Ortega Garcia at 10:43 AM No comments: